The most common nutritional deficiency in the U.S. is iron deficiency…AND…women are at greatest risk for obvious reasons that include monthly cycles, child birth, hormone changes, etc. Without hemoglobin, a protein that helps red blood cells deliver oxygen throughout the body, health cannot be achieved – iron delivers that. When iron is deficient it leads to a disorder called anemia but that condition carries a litany of symptoms that can usually only be medically identified through a ferritin test that measures your body’s iron levels. 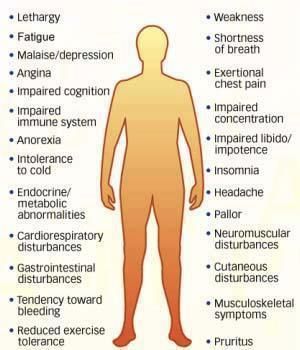 Monthly Menstrual Cycles – women are often anemic due to heavy periods that significantly reduce blood levels; when iron is deficient, the replacement is only about half of the blood loss and the following month the cycle repeats. According to director of gynecology at Mount Sinai in New York City, Jacques Moritz, MD, the monthly period of a woman should only fill a total of two to three tablespoons each month; if you lose more than that, get your ferritin levels checked.

Unexplained Exhaustion and Stamina – being overly tired is often too easily dismissed as just part of modern day stress. Most of us, especially women, are so programmed to living hectic lives being all things to everyone that they easily dismiss symptoms, especially if they’re a single mother. That said, if you’re iron deficient then less oxygen reaches your tissues so your body cannot generate the energy needed. Those who are diagnosed with iron deficiency are often labeled as having “tired blood” because they experience weakness, extreme fatigue/endurance, irritability, brain-fog and often muscle weakness.

Colorless Complexion – hemoglobin is responsible for the red color in your blood and that rosy hue/glow to your complexion, regardless of your skin color, because any skin tone can look pale or sickly. This often occurs because low levels of protein suck the color straight from the skin. Those with a light or fair complexion can easily be spotted. However, those with darker complexions may have to look inside their lips, gums, and inside of their bottom eyelids to see if they’re less red/rosy than normal from iron deficiency.

Short-winded – when you’re iron deficient, oxygen levels are reduced and can manifest as shortness of breath while doing ordinary tasks that you normally handle without those symptoms like gently climbing stairs or your morning walk.

Unusual Heart Rhythms – heart irregularities don’t usually show up with mild iron deficiency. That said, when the deficiency is long-standing or you have been diagnosed with a heart condition, an in-depth analysis should be performed by your physician if you experience irregular heartbeats, heart murmurs, enlarged heart or even heart failure. The Texas Heart Institute Journal suggests to get your iron levels checked if you have any heart irregularity because iron deficiency can worsen a heart condition.

Restless Leg Syndrome – according to John Hopkins Medical Center, more than 15% of those with restless leg syndrome have been found to also to be victims of iron deficiency and the more deficiency the more symptoms of this syndrome.

Headaches – if no other known known cause is present, consider iron deficiency as a cause of chronic headaches. The brain’s arteries can swell when insufficient oxygen is provided, causing headaches.

Strange Cravings – yes, there is actually a name for strange cravings like those for ice, clay, dirt, chalk, and paper. These cravings are called pica and it’s often caused by an iron deficiency, according to Dr. Berliner of the National Headache Foundation. So, if you begin to have strange cravings, get your iron levels checked.

Anxiety and Panic – yes, life is stressful but when iron deficient it can turn that normal anxiety into panic as the lack of oxygen triggers your sympathetic nervous system like putting the “petal to the metal” and speeding up your responses. In addition, the panic becomes fight-or-flight mode as the iron deficiency persists even when you keep thinking, “I have no reasons for this unsettling panic.”

Vegetarian Syndrome – you may believe that all iron is the same, not so quick! Your body best absorbs heme iron, which is derived from meat, poultry and fish at a rate of three or more times more efficiently than non-heme iron derived from plants. Yes, vegetarians can get enough iron but it requires very careful meal planning and adherence. A good way to get enough good iron is to eat dark leafy greens, whole grains, and legumes that are rich in iron and then consume them along with vitamin C-rich foods like peppers, berries and broccoli that help boost absorption.

Hypothyroid Syndrome – low thyroid function is unfortunately fast becoming the “norm.” When the body is iron deficient, it slows the thyroid function and blocks its metabolism-boosting effects. If you notice unusually low energy levels, weight gain and inability to lose it in spite of healthy eating and exercise, low body temperature and increased sensitivity to cold, have your iron levels checked and also do the iodine absorption test to see how deficient you really are in supporting thyroid function. To download instructions for the iodine patch test you do at home go to www.gloriagilbere.com and look for “Downloadable Forms” in the tool bar.

Pregnancy – according to Dr. Moritz, if your pregnant (especially with multiples), have pregnancies close together, regularly vomit from morning sickness or lost a substantial amount of blood during delivery, have iron levels checked. Iron doesn’t get the attention in pre-natal nutrition, as does folic acid for instance, but it should, because not only does the mother need to boost iron levels, so does the baby.

Tongue Disorders – iron deficiency can reduce levels of myoglobin, a protein in red blood cells that supports muscle health, and that includes the muscle making up your tongue. As a result, iron deficient people complain of a sore, inflamed, and strangely smooth tongue with little color.

Celiac and Inflammatory Bowel Disorders – because these disorders create challenges in nutrient absorption, additional iron is needed. These disorders cause acute inflammation and damage to the digestive system, be sure to check for iron deficiency.

Getting More Iron – there is no one-size-fits-all for iron supplementation. However, women between ages 19 and 50 need about 18 mg. daily. If pregnant, increase up to 27 mg. with guidance from your physician. If breast-feeding 9 mg. is usually recommended, check with your doctor. Older than age 50, and not menstruating, you usually only need 8 mg. daily – easy to obtain as a single serving of lentils, spinach, beef, nuts, chicken, or chickpeas will provide your daily dose.