Many of my patients and readers ask exactly where my Health Sciences and Research Center is based within Ecuador, the map above shows its placement in the country…thanks for asking. My Institute for Wholistic Rejuvenation and all Patient Services are still located, and will remain, at our corporate office in Sandpoint, Idaho, under the careful eye of Sharon who has been with us for, well, many many years!

This month, since we’re all so busy for the holidays and year-end commitments, I’m writing a longer blog with nothing but recipes so you can add a Latin flair to your holiday table if you choose. There will be no other blog articles but after reading this, I believe you’ll agree this fits the bill for the month with a little historical perspective thrown in for good measure and fun reading.

December 24th: All Ecuador celebrates Christmas. The streets and churches have special decoration with Nativity scenes, lighting, ornaments, etc. It is characteristic in Ecuador to celebrate the 24th with midnight mass or “ Misa de Gallo”, shortly after Christmas dinner. This is their ceremony commemorating the birth of Christ in this deeply religious Christian culture.

Carols, and the “Pase del niño” (religious procession parade) stroll through representative streets and neighborhoods – which each neighborhood trying to out-due the others. Pase del niño is a religious procession representing the characters of Christmas with bright colors and all that encompasses pageantry. Joseph and Mary with the child in arms on a donkey pass through the streets while the community with prayers and songs, accompanies them.

December 31st: is celebrated as the end of the year or the burning of the past – what a great idea! Typical activities are making life-sized stick figures or dolls that represent the year that is ending and then the rag dolls are burned at midnight.

At the end of the year the wills of the old year are also read with humorous phrases and jokes. "Widows" of the old year (Año Viejo), are men dressed as women. They dance and act-out to the delight and laughter of the passers-by as they’re on most corners on main highways and entrances to various neighborhoods (barrios). They are masked, clowns, and various characters. Celebrations abound and they end with the burning of the rag dog, fireworks and midnight dinners – happy to leave the past year behind and make commitments to a better new year.

Most holidays in Ecuador are the result of Christian colonization that modified the rituals and celebrations of the indigenous community. Andean and ancestral religion moved to the Catholic religion which, until today, is a blend of the indigenous ancestral world and nature.

Sweets and varieties of biscuits are abundant this time of year. Although Christmas presents are exchanged, the usual are token gifts of sweets, fruit, drinks and a small toy for children. Ecuadorians, especially outside the large urban cities, are not yet spoiled by the commercialism in other countries; it’s the thought behind the token gift, not the dollar value – how refreshing! 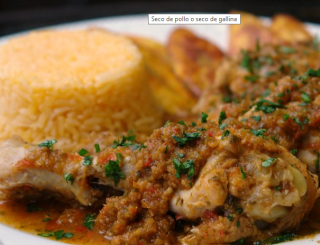 For a country that celebrates great food throughout the year and serves-up the most amazing healthy cuisine, the Christmas table mostly consists of variations of rice: rice with cheese, rice with corn, rice with stew, spicy rice, sweet rice, and even sweet and spicy rice (Arroz Navideño, or Christmas rice). There is, of course, some chicken, turkey, and salad, but rice is still the biggest part of Christmas dinner in Ecuador. There is usually fried plantains almost as a garnish as well. For reasons, I haven’t yet figured out, turkey is a delicacy here and VERY expensive. Therefore, most people serve chicken as their main course (plato fuerte).

The abundance of sweets, however, is impressive! There’s a mouth-watering spread of candies, cakes, biscuits, fruits in sauces, and cupcakes in a variety of shapes, and forms.

Empanadas de viento, or fried cheese empanadas, are the most delectable traditional Ecuadorian empanadas – filled with cheese, diced onions and herbs – fried until crispy, and served sprinkled with sugar (I use healthy coconut oil to fry them). These are truly my favorite empanadas, the combination of the gooey cheese and onions inside a crispy fried empanada and topped with sugar is delicious. They’re the perfect breakfast or afternoon snack with a hot cup of exquisite Ecuadorian coffee or tea.

The most important part is making sure the empanadas are sealed well, I seal them four times: first with my fingers, next with a fork, then with my fingers twisting and folding the edges, and finally with the fork again. It also helps if the empanadas rest for about an hour in the fridge before frying them, this might seem over the top just to seal an empanada, but I have experienced them leaking while they are being fried and it is very messy and madding after spending so much time “pinching” them. 15 medium size or 25 small empanada discs (use this recipe for homemade* empanada dough for frying or store bought empanada discs – the store-bought dough is easily found in Latin markets.

These fried empanadas also make a great appetizer, although some may consider them a dessert as well, which they surely can be.

¼ to ½ cup water or milk, adjust as needed to obtain a soft and smooth dough 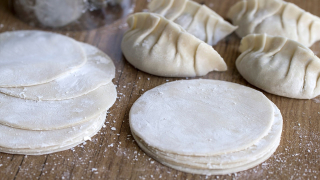 Kitchen Notes: It’s easy to find ready-made frozen empanada discs in Latin grocery stores, and even though I was skeptical at first, they are quite good. However, homemade always taste better and fresher. Another benefit of making homemade empanada dough for baking is that you can customize the dough by adding spices, herbs or a bit of sweetener that will add flavor and complement or contrast with the fillings. You can also make a large batch of homemade empanada dough, roll it out and cut it into discs, then freeze the discs (separate with wax paper) for later use.

Dulce de higos, also known as higos pasados, are fig preserves cooked in spiced syrup of panela/piloncillo (unprocessed brown cane sugar and spices). They are a very typical dessert in Ecuadorian households, and are one of those desserts that you might be served both in the home of humble farmer who lives in a house with no electricity, at a gourmet dinner of a wealthy businessperson in one of the main cities, or in a typical restaurant. These caramelized figs are usually served with a slice of fresh cheese, queso fresco or quesillo, to help balance the sweetness…they are quite the eclectic treat.

Slices of quesillo cheese or queso fresco on the side OR topped with a soft cheese like chevre or cream cheese.

VARIATION: Place shredded or crumbled cheese on top and broil just until the cheese begins to melt.

Ecuadorians prefer simple desserts because their main course (plato fuerte) is very filling, and usually eaten between 1: and 3: pm.

A typical dessert in Ecuador usually consists of a perfectly ripe fruit, such as a slice of papaya with a drizzle of lime juice or a piece of babaco with a little bit of honey, a refreshing helado de paila (hand-churned sherbet), a fluffy bizcochuelo, or a sweet fig preserve as in this recipe presented. Right along with Colonial customs, it is also common to eat sweets in larger quantity with afternoon coffee or tea rather than for dessert after a large filling meal.

Happy Holidays, I hope you’re enjoying my recipes, tidbits and a glimpse of life in Ecuador…