I'm often asked if wine is good for our health and, if so, how much, how often and what kind. You Asked...here is the research...

If you need to get your cholesterol levels under control, a glass or two of red wine a day may be able to help. Red wine contains resveratrol, a polyphenol naturally found in grapes that has been shown to lower LDL cholesterol (also known as “bad” cholesterol). Oxidized LDL particles are known to play a key role in the formation of arterial plaques and the development of atherosclerosis.

A recent study measured the blood sugar levels of more than 200 people living with type 2 diabetes. The subjects drank either wine or mineral water daily with a dinner based on the Mediterranean diet. For those who metabolize alcohol slowly, the participants who drank red or white wine saw beneficial effects on blood sugar compared to those who drank mineral water. They also experienced a significant reduction in fasting plasma glucose and an improved measure of insulin resistance.

Various studies over the years have shown significant reductions in Alzheimer’s disease, cognitive function, and dementia in those who moderately consume red wine.

For example, a research team at the David Geffen School of Medicine at the University of California in Los Angeles conducted a pilot study with men and women, ages 66 to 82, who had experienced mild cognitive decline for at least six months but who had not been diagnosed with AD or another type of dementia. Half of the participants were given a daily dose of a placebo—an inactive substance, often in the form of a pill, that looks like but isn’t actually medicine. The other half of the study’s participants took a daily dose of freeze-dried grape powder equivalent to one-and-a-half glasses of wine.

After conducting various neurological tests, researchers found that the group that consumed the grape powder experienced no significant decline. In the case of the group taking placebos, the regions of the brain that typically decline when a person experiences the early stages of dementia actually did become less active.

While depression has a significant link to heavy alcohol consumption, moderate amounts of red wine have been shown to have the opposite effect. According to a Spanish study, a group of men and women between the ages of 50 and 80 who consumed moderate amounts of red wine had significantly lower rates of depression than those who didn’t drink any alcohol. Again, the positive effects involve resveratrol, which can have an anti-inflammatory effect on the brain. AND, keep in mind that the health-enhancing benefits are at the recommended daily doses, not more than.

A study conducted in Iceland found those who consume wine in recommended amounts are 43% less likely to develop cataracts, again, the healthy effects are attributed to resveratrol. 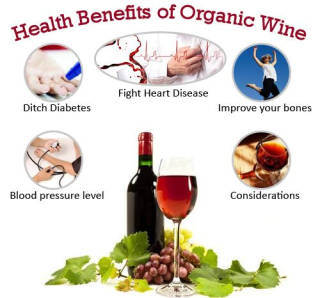 We know from medical research about the effects of red wine on our health, but is wine healthy if it’s of another variety? And what about champagne?  Worry not—other types of wine can be good for you too. For example, while red wine is still the top choice for heart health, white wine has been shown to have similar effects on cholesterol levels, according to the European Society of Cardiology.

A separate study published in the Annals of Internal Medicines showed the results of a study conducted in Israel where 224 participants with diabetes were asked to drink either white wine, red wine, or mineral water with dinner every day for two years. Some of the participants in the groups that drank red wine and white wine showed similar improved glucose control tests.

Rosé wines contain significant amounts of resveratrol, depending on how they’re produced, and champagne and sparkling wine contain high levels of polyphenols that can benefit your heart and brain, but with fewer calories than wine. But if you want to be sure that you’re getting maximum amount of benefits that grapes naturally have to offer, it’s best to stick with red wine.

Organic = the way the grapes are grown without chemicals