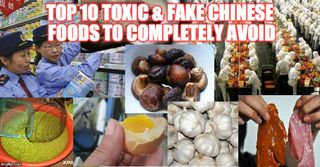 As a Doctor of Natural Health, Health Detective and Investigative Health Journalist, I’ve reported on some devastating findings in that which we eat, are exposed to environmentally and everything in-between…this report is one of the most disturbing – we each need to stay informed, these findings are what “feeds” my passion and commitment of Health thru Education© – now more than ever!

I’ve reported on China producing PLASTIC RICE, you read that right, PLASTIC RICE! Ingesting even small amounts is dangerous. In addition, the BPA chemical in plastics mimic estrogen – skyrocketing in the body every time its ingested. If you ingest plastic rice, you’re basically signing a death sentence to die young of diseases like breast cancer. 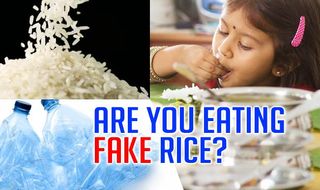 I’ve always stayed away from products made in China as much as possible, especially food. Making cheap, fake food that looks and tastes like “real food” in order to add to their bottom line without any consciousness of consequences to me is criminal.

The following is a brief summary of my latest research on Chinese food you should completely avoid, in my professional opinion:

China is one of the most polluted regions in the entire world – 70% of its rivers are heavily polluted, the air is so toxic I had to wear a mask all the time on my last trip there a couple of years ago when I was invited to teach, the air is a “toxic soup” of pollutants and chemicals that breathing it in large cities like Beijing and Shanghai does as much damage to your lungs as smoking 40 cigarettes’ a day, according to studies conducted in 2015. I love the Chinese people and their culture but I won’t be returning, it’s not worth the toxic exposure! I have made dozens of trips to various parts of China since the early 1980’s, it sad to me that a country so rich in history has succumb to being the leader in toxic products – all in the name of “progress.”