Since one of my specialties is counseling clients regarding intestinal disorders, specifically colon health, an interesting subject arose recently that set me to wondering how many of us really know the history of toilet paper…so…the health detective in me went to work and here it is, your chuckle for the day… 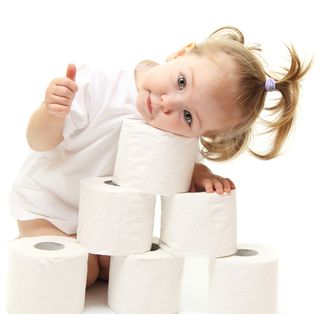 Yes, as hard to believe as it may be for those of you that know me personally, I did camp as a kid with my parents and grandparents. Anyone who’s done so knows that necessity is the mother of invention and things like dry leaves, twigs and rags come in handy when toilet paper (T.P.) is not readily available or when the “urge” hits and you’re in the wilderness.

The global choices and customs of cleaning, well, you know where, may surprise you.

T.P. was actually invented in China. The earliest historical accounts of using wads of tissue paper to clean up are found in the 6th century. The first toilet paper was manufactured on a large scale for that particular use occurring in what is today Zhejiang province in the 14th century. Flashback: I smiled when I found this bit of research because all I could do was recall my first trip to Communist China on their old train and I couldn’t figure out why my friend and I were the only ladies wearing pants in the cold of November on our way from the coast to Beijing and the other ladies were wearing skirts…I soon found out. Their facility was a small closet type room on the train with an open hole in the floor where you could see the tracks as the train rocked n’ rolled. You stool over the hole and did, well, your business – without even a door for privacy. When my friend and I realized what we had to do to accomplish our “business” we laughed so hard while the other stood guard at the door blocking any direct view. AND, there was no T.P. or any way of washing…an adventure I’ll never forget but smile at the memory and all the experiences on that trip.

Toilet paper as we know it wasn’t commonly available in the United States until the mid-19th century. Before it was manufactured in the ubiquitous 4 ½” rolls we all know and love, toilet paper came in bundles of flat sheets, roughly the size of the box of today’s facial tissues. The father of American toilet tissue is said to be J.C. Gayetty, and his “Gayetty’s Medicated Paper for the Water-Closet” – available from the Civil War era, well into the 1920s.

What was used prior to mass production of T.P. depends on the part of the world you refer to.

Yes, we are a spoiled nation in many ways. That said, because of modern industrialization, we’re also more constipated than any previous generations and sicker too. Our diets are devoid of adequate fiber as in the diets of our ancestors and past generations, therefore, often need the help of not only an all-natural fiber supplement and, at times, a natural non-habit-forming herbal stool softener.

Ancient civilizations included a great deal of fiber in their diets (they weren’t rushed and didn’t have processed food) and thus when they evacuated their bowels it was full and complete, not soft, incomplete or infrequent – making it easier to be successful in cleaning procedures as described above because very little, if any, residue was present.

For a healthy fiber supplement that is equivalent to consuming platters full of raw vegetable fiber, consider the proprietary blend of ColonSweep, available only through its exclusive distributor Natural Rejuvenation Solutions. In addition, when you occasionally need that gentle “nudge” consider the herbal stool softener that does not contain any known habit-forming ingredients and has an assertive, not aggressive, action on your colon, EliminAid. I personally use ColonSweep daily in varying amounts depending on my diet. I no longer need to use EliminAid daily as I once did, but find it necessary when I travel or out of my normal routine. Therefore, I take one EliminAid each night at bedtime from the first night away from home and continue until one or two days after I return. In addition, remember to hydrate well, especially when flying, as the pressurized cabin dehydrates us and the reason you may get constipated during a trip. Anytime you are out of your routine, your body suffers, use natural support to avoid sluggish elimination which becomes toxic and stifles your immune defenses.