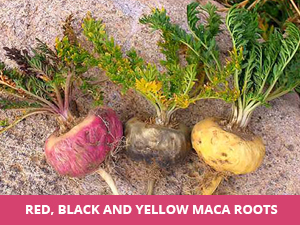 As many of you know, I recently begun spending some of my time in Ecuador teaching and providing cooking classes to show people how to cook with foods that are NOT inflammation-inducing. In addition, this experience offers me the opportunity to expand my Health Sciences & Research division to continue to educate through my online classes. Many of you have asked about vegetables and regional dishes that you may not be familiar with and asked if I’d share some of my new discoveries. One of the root vegetables most American’s are not very familiar with is Maca. This article deals with that vegetable and its awe-inspiring health benefits.

AND, for those of you asking if my time in Ecuador changes the way I counsel my clients or classes, it DOES NOT. Since retiring from my two brick-n-mortar clinics, all my consulting is virtual via telephone or Skype…and…I place the call to you in over 19 countries – one of the advantages of our cyber global connectivity. If you’d like help in identifying causes, effects and natural solutions to your “invisible illnesses” that include inflammation and digestive disorders, go to my website and complete the forms to become a client, currently I have clients in 11 countries and often in as many as 19.

In Peru, and throughout most of South America, maca is a root vegetable that’s roasted or used in baking. In the US, this super food is available in supplement form and as a powder that you can blend into beverages or sprinkle on foods.

The root of the maca (Lepidium meyenii) is shaped like a large radish – a cousin to other cruciferous plants, such as cauliflower and Brussels sprouts. In addition to its healthful fiber, complex carbohydrates and protein, maca provides numerous minerals, including calcium, magnesium, phosphorous, potassium, sulfur, iron, zinc, iodine and copper… vitamins B-1, B-2, C and E… nearly 20 amino acids, including linoleic acid, palmitic acid and oleic acid… as well as various plant sterols, which are natural cholesterol-lowering agents. All of these nutrients have been shown to promote health in a multitude of ways.

If you want to boost energy — increase libido — fight stress and reduce the risk for conditions such as diabetes or arthritis, maca is for you.

In the Incan empire, maca was legendary for providing extra strength and endurance to warriors and battle leaders. In those times, the men discontinued the use of maca after battle because after the fighting ended they needed to protect their women from the maca-heightened libido.

Modern research has reported that maca does indeed increase sex drive in men. One double-blind, randomized study published in the journal Andrologia examined the effect of maca on sexual desire in 57 men, ages 21 to 56. Participants took either placebos or 1,500 mg or 3,000 mg of maca daily. After four, eight and 12 weeks, they reported on their sex drive levels. Placebo users experienced no change in libido, while the men taking either quantity of maca reported heightened sexual desire starting at eight weeks and continuing throughout the study.

It's Biological Functions: It’s libido-enhancing powers are mainly attributed primarily to its amino acids and sterols. Blood tests indicated maca did not affect the men’s levels of the hormones testosterone or estradiol (a form of estrogen present in women and men) – an important virtue of maca is it does not change hormone regulation in men.

A small study published in the Asian Journal of Andrology yielded some interesting results, indicating that maca also improved male fertility. Nine men, ages 24 to 44, received either 1,500 mg or 3,000 mg of maca per day. Compared with tests done at the outset of the study, semen analysis performed at the end of the four-month research period demonstrated that maca increased semen volume, sperm count and sperm motility at both dosage levels. Again, maca achieved these results by unknown mechanisms that were not related to increases in testosterone or other hormones.

For women, maca has a long-standing reputation for soothing menopausal symptoms. A study published in the International Journal of Biomedical Science details research at five sites in Poland, focusing on 124 women, ages 49 to 58, in the early stages of menopause. During the study, the women took varied combinations of either a placebo or 2,000 mg of maca every day. Results: Compared with placebo users, those taking maca experienced significant reductions—84% on average—in the frequency and severity of menopausal symptoms, particularly hot flashes and night sweats.

Additional Benefit: In a related study of the trial, researchers found that the women taking maca had a notable increase in bone density.

It’s Biological Functions: Blood tests showed that maca reduced follicle-stimulating hormone, which normally increases during menopause and is thought to be one cause of troublesome symptoms, such as hot flashes and night sweats. Study authors speculate that maca stimulates the regulatory mechanism responsible for optimizing ovarian function and estrogen secretion, significantly increasing the level of estradiol in a woman’s body.

To summarize, it appears maca offers a safe and effective way to reduce menopausal symptoms—and it is unlikely to increase a woman’s risk for breast cancer, heart disease and stroke, as can non-bioidentical hormone replacement therapy.

Scientists don’t yet know for certain, but the fact that breast cancer is not among the leading causes of death in Peruvian women, despite a diet rich in maca, supports the assumption. In addition, increases in estradiol as a result of taking maca supplements may be safer than adding a hormone to a woman’s system because maca appears to stimulate the body’s natural estrogen production and act as a hormone stabilizer.

Any kind of stress – from work, personal challenges, illness, injury/trauma, toxins, hormonal imbalances or any other sources of assault on the body—can negatively affect how our bodies function. Maca is what holistic doctors call an adaptogen, a plant or herb that boosts the body’s ability to resist, deal with, and recover from emotional and physical stress.

Practitioners of traditional medicine from China and India have known about and made use of adaptogens for centuries, though the term itself was not coined until the middle of the 20th century. Well-known adaptogens include herbs like ashwagandha, ginseng, rhodiola and licorice root. In my counseling, I never use licorice root because of its propensity to cause cardiac symptoms like irregular/pounding/rapid heartbeat. The remainder of adaptogens listed I use, albeit carefully, taking the clients entire health needs into account.

It’s Biological Functions: To be classified as an adaptogen, a natural substance must meet very specific criteria. It must be nontoxic, normalize levels of chemicals raised during periods of stress, and produce physical, chemical and/or biological responses that increase the body’s resistance to and ability to deal with stress responses.

Although all adaptogenic plants contain antioxidants, researchers do not believe that antioxidants alone account for adaptogens’ normalizing powers. Rather, it is thought that a variety of phytochemicals helps balance the dozens of endocrine, digestive and neural hormones that operate throughout the body—including insulin (which regulates blood sugar levels) and dopamine (which enhances and stabilizes mood). Many adaptogens also stimulate immune system components, leading to better overall immune function.

In addition to its documented beneficial effects on the human reproductive system, laboratory tests and animal studies suggest that maca may also reduce the risk for…

More is NOT Better…

Since its long-term effects have not yet been scientifically studied, I recommend taking a break from maca now and then in order to give the body’s cell receptors a break from any hormone stimulation. People who want to try maca to see if it is a “super food” for them should take supplements for three months (six months for women with severe menopausal symptoms), then stop using maca for one or two weeks. They may then continue this regimen as needed for symptom relief.

Maca is available in supplement and powder form over-the-counter in the U.S. The average dose of maca supplements is 1,000 mg to 2,000 mg daily—which you can take with or without food at any time of day. Make sure the maca is organic.

Or you can get your maca by adding powder to your favorite foods and drinks. – it has a slightly nutty flavor, so you may enjoy mixing it with a milk alternative like almond milk. Other ways to incorporate maca into your diet include…

I look forward to sharing more of my discoveries in Ecuador and my travels throughout South America working with indigenous people who have centuries of experience in healthy eating and natural therapies...being here "feeds" my soul, my health, my passion for natural health and restored my faith that there IS a place where healthy living and self-sustainability is PRIORITY.