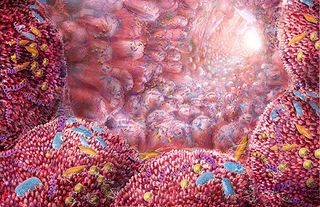 Because gut health and gut inhabitants (microbiota) have finally come to the forefront of overall health, I am constantly being asked to explain what it is, what does it do, why do we need it, and how it develops or gets depleted. The following will hopefully provide a lot of those answers and more in coming articles.

Everything you always wanted to know, should know, about gut microbiota…

The word microbiota represents an ensemble of microorganisms that resides in a previously established environment. Human beings have clusters of bacteria in different parts of the body, such as in the surface or deep layers of skin (skin microbiota), the mouth (oral microbiota), the vagina (vaginal microbiota), and so on.

WHAT is gut microbiota?

Gut microbiota (formerly called gut flora) is the name given today to the microbe population living in our intestinal tract.

Our gut microbiota contains tens of trillions of microorganisms, including at least 1000 different species of known bacteria with more than 3 million genes (150 times more than human genes). Microbiota can, in total, weigh up to 4.4 pounds (2 kg). One third of our gut microbiota is common to most people, while two thirds are specific to each one of us. In other words, the microbiota in your intestine is like an individual identity card.

WHERE can we find it?

As its name states, gut microbiota is harboured in the intestine, one of the main areas in our bodies that comes into contact with the external environment (other examples are the skin and the lungs).

WHY is it important?

While each of us has a unique microbiota, it always fullfils the same physiological functions, with direct impact on our health

Some of the functions include:

Taking into account the major role gut microbiota plays in the normal functioning of the body and the different functions it accomplishes, experts nowadays consider it as an “organ”. However, it is an “acquired” organ, as babies are born sterile; that is, intestine colonization starts right after birth and evolves as we grow.

WHEN does it start developing?

The development of gut microbiota starts at birth.

Sterile inside the uterus, the newborn’s digestive tract is quickly colonised by microorganisms from the mother (vaginal, faecal, skin, breast, etc.), the environment in which the delivery takes place, the air, etc. From the third day, the composition of the intestinal flora is directly dependent on how the infant is fed: breastfed babies’ gut microbiota, for example, is mainly dominated by Bifidobacteria, compared to babies nourished with infant formulas. Scientists consider that by the age of 3, microbiota becomes stable and similar to that of adults, continuing its evolution at a stadier rate throughout life.

HOW does it evolve?

The composition of our microbiota evolves throughout our entire life, from birth to old age, and is the result of different environmental influences.

Gut microbiota’s balance can be affected during the ageing process and, consequently, the elderly have substantially different microbiota to younger adults and therefore a greater need to supplement daily.

While the general composition of the intestinal microbiota is similar in most healthy people, the species composition is highly personalized and largely determined by our environment and our diet. The composition of gut microbiota may become accustomed to dietary components, either temporarily or permanently. Japanese people, for example, can digest seaweeds and soy (part of their daily diet) thanks to specific enzymes that their microbiota has acquired from marine bacteria.

Although it can adapt to change, a loss of balance in gut microbiota may arise in some specific situations; called dysbiosis. Dysbiosis may be linked to health problems such as functional bowel disorders, inflammatory bowel disease, allergies, vaginal yeast infections, obesity and diabetes.

Many studies have demonstrated the beneficial effects of prebiotics and probiotics on our gut microbiota. Serving as “food” for beneficial bacteria, prebiotics help improve the functioning of microbiota while allowing the growth and activity of some “good” bacteria. Present in some fermented products such as yogurt and cultured vegetables, probiotics help gut microbiota keep its balance, integrity and diversity; basically food for the good bacteria.

Thanks to technological progress, the picture of the bacteria living in the gastrointestinal tract is becoming clearer. Researchers now use a range of techniques, including the tools derived from molecular biology, to further clarify the mysteries of microbiota. While there are still some things that are yet to be discovered, more and more findings are being presented every day.

Great post! yeah the microbiome is becoming so trendy these days in the health world, it's like the new low carb diet or something!