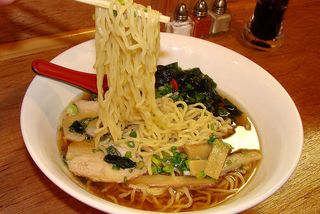 The first-of-its-kind experiment by Dr. Braden Kuo of Massachusetts General Hospital wanted to find out exactly what happens to food in the stomach and digestive tract after consuming ramen noodles – containing a deadly preservative. 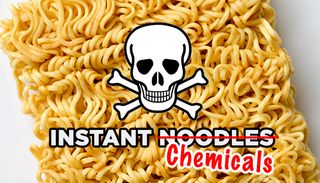 Yes, this seems to be the favorite in fast-food, especially among college students and those on a tight food budget who want something fast, easy and cheap. Obviously these people are unknowledgeable about what EXACTLY they’re eating or they wouldn’t knowingly consume poison, or would they for the sake of convenience?...CLICK to continue reading...

Ramen noodles contain Tertiary-butyl hydroquinone (TBHQ) – a by-product of the petroleum industry and a food additive frequently used to preserve cheap processed foods although it is a chemical neither digestible or beneficial in any way for your body.

In addition, Ramen noodles contain an incredibly high amount of sodium, calories and saturated fat. AND, even the packaging contains the dreaded chemical bisphenol-A (BPA), the same chemical used in Styrofoam cups. BPA is a carcinogen and considered a hormone disruptor that negatively affects hormones in our body such as estrogen.

PRESERVATIVES + PACKAGING = A Minefield of Chemicals leading to serious health disorders and diseases.

A gastrointestinal specialist conducted an experiment with a time lapse video inside the stomach, comparing both fresh and preserved ramen noodles. After two hours of digestion, the results were staggering.

Thanks to the “smart pill”, a camera the size of a multi-vitamin, Dr. Kuo could do his experiment, showing what happens in the gut of someone who ate a package of instant ramen noodles compared to fresh. Dr. Kuo recorded 32 hours from the pill camera. “What we’re seeing here is a stomach contracting back and forth as it’s trying to grind up the ramen noodles,” Dr. Kuo says of the beginning of the video.

The video at 20 minutes, and 2 hours, shows a striking difference. “The most striking thing about our experiment when you looked at a time interval, say in one or two hours, we noticed a processed ramen noodles were less broken down that homemade ramen noodles”, noted Dr. Kuo. This affects nutrient absorption and could theoretically allow preservatives to linger longer periods in the stomach cavity before being transported to the intestines and subsequently eliminated.

In processed foods, TBHQ is sprayed on the food or on its packaging to prevent discoloration and changes to flavor and odor. Others products, such as cosmetics, perfumes, varnishes and lacquers, contain TBHQ to maintain stability.

Small amounts of TBHQ may not kill you (although death has occurred) or even make you feel immediately sick, but it can have a long term effect on your health such as weakening of organs and contributing to the onset of cancers and tumors.

The FDA says that TBHQ must not exceed 0.02 percent of its oil and fat content. Death has occurred from the ingestion of as little as 5 grams. This would be a considerably high dose compared to the amounts found in foods, but it gives us a good indication on the toxicity level of this preservative.

At higher doses, it has some negative health effects on lab animals, such as producing precursors to stomach tumors and damage to DNA. A number of studies have shown that prolonged exposure to high doses of TBHQ may be carcinogenic, especially for stomach tumors.

Ingestion of a single gram (a thirtieth of an ounce) has caused nausea, vomiting, anaphylactic shock, diarrhea, ringing in the ears, delirium, a sense of suffocation, and collapse. Some people have reported having anxiety and night terrors and asthma after ingesting TBHQ. Others have reported having a body rash and swollen lymph nodes.

You can find TBHQ in McDonald’s chicken McNuggets across the United States, however McDonalds European chicken nuggets do not contain the toxic preservative. This is interesting since both the European Food Safety Authority (EFSA) and the FDA have evaluated TBHQ and determined that it is safe to consume at the concentration allowed in foods.

There are many more processed foods not listed above which contain TBHQ. A conclusion that is now quickly reaching vast numbers is that all processed food in general, has far too many problems to be considered safe. Our regulatory agencies are not responsibly working to resolve these problems, and instead of removing these toxins from the food supply are claiming that safe levels exist.

If you’ve been consuming processed foods (or prescription medications) and are ready to help your body rid itself of damaging ingredients, consider using a scientifically-formulated functional food to help reduce the toxic burden of both Phase I and II of the liver and then excrete those toxins via your kidneys.

The studies done on this unique formula showed significant reduction in body burden after taking two-scoops once a day added to your green drink or simply on its own with water or milk alternative. I use it in my daily green drink as part of my overall protein and the amount depends on whether for maintenance or after a trip, for instance. I no longer need it daily for immune issues, however, I always use it for at least two weeks after travel (especially out of the country) since I don’t have control over all food quality.

NOTE: Just because there are natural remedies to help detoxify your liver doesn't give you permission to eat processed foods or food that is toxic. However, because we live in a toxic world and don't have control over everything we eat or are exposed to environmentally, medical foods are our best proactive measure as well as helping us to repair that VITAL organ, our liver.

View this photo
to download the entire flier describing this functional food available only from the exclusive supplier, Natural Rejuvenation Solutions.