Pain and inflammation is at the top of symptom-lists by the majority of the population, especially as related to disorders like Fibromyalgia and Arthritis. Having available a non-drug remedy with effective ingredients all in a capsule, without all the side-effects, is as important as uncovering the underlying causes because without being able to manage the pain and ensuing inflammation, the body cannot repair and rejuvenate. 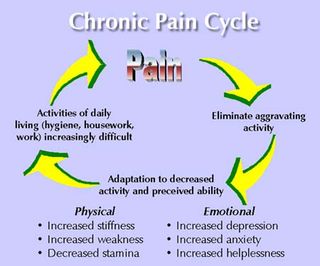 Many years in the formulating, a new product that fulfills all of my requirements for a safe, effective, non-drug supplement without side-effects is finally available. Some complexes available either aren’t effective or they contain natural aspirin (willow bark) which is effective short-term but then can cause G.I. symptoms of stomach irritation when taken more than a few days – just like aspirin does.

This new proprietary blend, PainModulator was commissioned by The Institute for Wholistic Rejuvenation following my strict formulation specifics and guidance. We conducted a non-scientific study among some of our clients with the most stubborn and challenging pain symptoms of fibromyalgia. The results – they were very concerned the Institute didn’t have it in stock until all the formula and labeling met FDA guidelines. The formula worked so well, it’s now flying off the shelves. Participants used 2 capsules three times a day for chronic pain and those with acute pain used 3 capsules three times a day with complete amelioration of symptoms. This formula is only available from the exclusive distributor, The Health Matters Store and through a Certified Wholistic Rejuvenist Practitioner – you can order directly from the store without being a client.

The following are ingredients that make up this proprietary blend we’re excited to present:

Glucosamine HCI (plant-derived) – A naturally-occurring component of cartilage and synovial fluid. As a dietary supplement, reported effectiveness is impressive for osteoarthritis-type syndromes in strengthening cartilage surrounding joints as well as playing a major role in the synthesis of glycosaminoglycans. It’s also credited for helping maintain normal, comfortable joint spaces.

MSM (methylsufonylmethane) – This form of MSM is a naturally-occurring sulfur compound typically found in many grains, fruits and some vegetables. The body needs sulfur for the synthesis of cartilage and other connective tissue. The Clinical Drug Investigation Pharmacology Journal confirmed that studies show MSM, when used with glucosamine, was greatly effective for reducing inflammation and pain associated with osteoarthritis and other conditions affecting soft and connective tissues as those experienced in fibromyalgia syndrome.

A function of MSM not commonly known is its effective for relieving symptoms of frequency of bloody diarrhea associated with inflammatory bowel diseases, ulcerative colitis and Crohn’s disease. In addition, it is currently being used in studies to confirm its effectiveness for temporomandibular joint pain (TMJ), chronic venous insufficiency, diabetes, rheumatoid arthritis and leg pain resulting from lumbar spine disc degeneration and benefits following knee injury and/or surgery.

Tart Cherry Fruit – Tart cherries, also known as sour cherries, are grown in several regions of the U.S. They are naturally low in fat and calories and recognized for the following health benefits:

•             Heart Disease – The University of Michigan reported at the meeting of Experimental Biology that new research by the university revealed that after eating a cup and a half of tart cherries, the study participants experienced a significant surge in antioxidant activity – reducing risk factors for heart disease AND inflammatory disorders. Earlier studies by the same university linked tart cherry phytochemicals to significantly lower cholesterol levels and huge reduced levels of other unhealthy fats that impact the circulatory system.

•             Anti-Inflammatory – Tart cherries contain anthocyanins and bioflavonoids which inhibit specific enzymes that cause inflammation in the body. These substances are reported to act similar in their biological actions to that of aspirin, ibuprofen and other anti-inflammatory medications – WITHOUT the side-effects, including no stomach or lower G.I. irritation.

•             Sleep – Tart cherries contain melatonin – a naturally-occurring antioxidant known to balance the body’s circadian rhythms, responsible for regulating sleep patterns. Levels of melatonin fluctuate with age so those over 55 benefit when natural levels decrease and sleep is un-restorative or elusive.

Malic Acid – A natural compound found in fruits, mostly in apples. Studies validate malic acid helps increase overall tolerance and elevates energy levels. It’s an important function of the Krebs cycle that aids the conversion of food into energy. The body does produce some malic acid when its converts carbohydrates into energy but not sufficient for those with pain and/or inflammation and those over age 55. Because disorders like fibromyalgia and chronic fatigue syndromes always include low energy, this supplement is essential. A study in the Journal of Rheumatology reported that supplementation with 1,000 mg. of malic acid and 300 mg. of magnesium daily for six months decreased pain and tenderness significantly in subjects studied with fibromyalgia.

If the body is in good health it naturally produces malic acid. That said, when fibromyalgia, arthritis and/or chronic fatigue are present, the need for supplementation significantly increases. Studies also show malic acid improves respiratory conditions, circulatory insufficiencies, and hypoxia-related disorders (a deficiency in oxygen reaching the tissues).

Boswellia Extract (gum resin aka frankincense) – a popular substance used for centuries, particularly in Egyptian and Indian medicine. It is an extraordinary anti-inflammatory that also has anti-cancer properties by its ability to alter beneficial immune functions due to the oleogum resin in the herb. In addition it is used medicinally for:

Turmeric Extract (root) – For centuries this root has been used in many cultures for its known anti-inflammatory properties. Recent research now validates that turmeric has proved itself effective in treating various health disorders, some of the most credited benefits include:

Precaution: Turmeric should not be used by those with gallstones or bile obstruction or pregnant woman.

Ginger Extract (root) – science has finally caught-up with ancient history acknowledging the health benefits of ginger. It’s credited for conditions from cancer to migraines. The following are the most researched and reported health benefits:

Rosemary Extract (leaf) – This Mediterranean herb is a favorite with culinary experts and is packed with healing properties. Studies validate that it’s been used and credited for centuries for its medicinal benefits, the following are some:

Precautions: Woman who are pregnant, or believe they may be, should avoid large amounts of rosemary because it can lead to uterine contractions and/or miscarriage. Additionally, those with high blood pressure should not take excessive rosemary herb because it may raise their levels.

Many of you ask about the properties and benefits of each individual ingredient, you asked, here they are.

Why would you take medications known to have serious side effects when a natural complex is available? After working with thousands worldwide who are victims of pain and inflammation, I finally have everything we know works all in one formula, Naturally.

PainModulator is solely available through Natural Rejuvenation Solutions (formerly the Health Matters Store), click here to order or call toll-free 888.352.8175 in the U.S. and Canada. Local direct number is: 208.255.5252. It is packaged with 120 capsules.