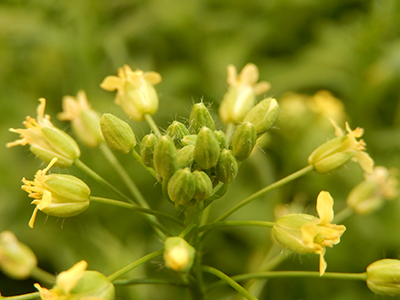 The oil with all the above health-enhancing properties, and many others, is Camelina sativa, also known as False or Wild Flax, German sesame, and Siberian oil seed. The plant is from the Cruciferae genre – an ancient oil-bearing plant used for thousands of years in Europe. It is a natural family of plants with four-petaled flowers in the mustard family.

The oil of Camelina contains an exceptionally high amount of Omega-3 fatty acids (up to 45%) and is unique in its antioxidant complex making it extremely self-stable as well as resistant to heat and rancidity. This well-balanced Omega-3 supplement is an extraordinary blend of health-enhancing polyunsaturated fatty acids. Because of its high oxidative stability, Camelina oil is an overall versatile source of both heart-healthy Omega-3 fats but also a healthy blend of powerful antioxidants that include tocopherols, carotenoids, and phosphatides.

In addition to its many superior health benefits, the delicate flavor of Camelina oil is likened to a delicate nutty flavor. Originating in Northern Europe, the Camelina seed is well-suited to colder climates and is now rediscovered and flourishing in areas of the U.S. and Canada. 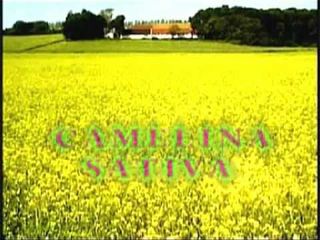 Today’s natural and wholistic healthcare principles highlight Omega-3 fatty acid benefits because they have significantly been forced-out of American diets by processing. Science validates Omega-3 fats are vital for physiological processes within the body and deficiencies are known to cause and/or accelerate serious medical conditions and disorders including, but not limited to:

There are two major sources of Omega-3 fatty acids – specific species of fish and a number of plant seeds and their oils – until now, flax oil was the best known.

One concern in choosing mainly fish lies in that not all fish contain Omega-3s – only fatty, cold water fish such as salmon, sardines and anchovies are rich in Omega-3s. With salmon, you must insure that it is wild-caught and NOT farm-raised. The diet of farm-raised fish does not allow it to accumulate Omega-3s in its tissues. In addition, farm-raised fish make indiscriminate use of artificial feed, antibiotics and other toxic substances currently acceptable in industrial fish farming. Some fish farms even use artificial colorants to make their salmon, for instance, look pink or pinker rather than its “natural” gray color when farm-raised.

Did You Know…when ordering farm-raised salmon, a merchant is given the choice of exact shake of pink he wants to sell – they actually use the Pantone color-matching guide used by printers!

The major concerns with fish oils include: contamination with polychlorinated biphenyls (PCBs) and mercury and, of course, rancidity.

Considering the above, I urge you to try cold-pressed and unrefined Camelina Gold Oil – an Omega-3 rich oil more resistant to oxidation and free of toxic contaminants.  Its delicate taste and aroma make it an excellent salad and cooking oil. Camelina seeds produce a golden-colored oil tasting much like almond oil and contains up to 45 percent Omega-3 alpha-linolenic acid (ALA). It is uniquely rich in powerful antioxidants, primarily tocopherols. At 110mg/100g, its vitamin E (tocopherol) content is among the highest of all natural tocopherol sources – by contrast, flax oil contains only trace amounts of vitamin E.

The Dark Side of Flax Oil

Namely, flax oil rancidity, auto-oxidation and free-radical formation are the dark sides of this popular polyunsaturated oil. The oxidation begins a chain reaction of free-radicals that affect all the molecules surrounding it. Millions of these molecules are either destroyed and/or oxidized simply by introducing a single free-radical. When cholesterol, for instance, is within close proximity of a polyunsaturated oxidized oil as the case with lipoproteins, they also become oxidized. This chain reaction doesn’t end there, the free-radical damaged oils are then absorbed into the lining of the arterial walls and believed to be the catalyst that forms arterial plaque.

The substance known as PGE2, derived from vegetable oils, are attributed to constriction of the blood vessels and platelet stickiness – the underlying causal effects that raises blood pressure and even further damage to arterial walls. Blood clots, as in embolisms, easily form in the arteries when there is trauma and/or injury as a result of oxidized fat that is attracted to and incorporated into the injury site when platelets are sticky. The clots can be large enough to block arterial flow or break-off and float, eventually lodging into smaller arteries. Clogged arteries are deprived of needed oxygen and exponentially cause death of healthy tissue as a heart attack when the clot occurs in the heart, or a stroke if it occurs in the brain.

Because of its delicate pleasing taste, it’s great in salad dressings, cold dishes and as a substitute for butter on baked potatoes and vegetables. It’s perfect for cooking, baking and frying. This unique oil is available at: www.camelinagold.com. 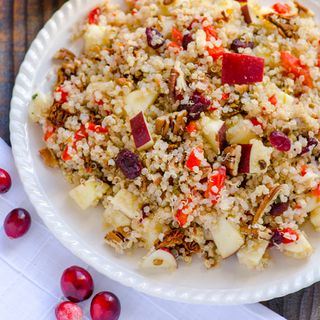 For the Maple Basil Dressing…

VARIATIONS: You can use any chopped nut, or substitute dried Montmorency cherries for cranberries – which are known to help reduce inflammation. Adding finely chopped cilantro adds a nice palette-pleasing tang.

Cook quinoa in 1 cup chicken broth with ½ cup water and salt – cook for 12 minutes or until al dente.  Bring to a boil then reduce heat to low and cook additional 2-3 minutes to desired firmness. NOTE: I like my quinoa al dente (a little firmer) for salads. I intentionally undercook it by about 3 minutes using the following ratio: 1 cup quinoa to 1.25 liquid. Drain and toss, while hot, with Camelina oil and apple cider vinegar.

Remove from heat and allow to stand about 5 minutes before fluffing with a fork. Cool in refrigerator and transfer to a large mixing bowl before adding other ingredients.

While quinoa is cooking, chop and prepare remaining ingredients and add to large salad bowl.

In a small mixing bowl, whisk together the ingredients for the Maple Basil Dressing, taste to adjust for individual preferences and then pour over salad. NOTE: Best when made at least 2-4 hours before serving or overnight in refrigerator to allow flavors to blend.

Keeps refrigerated for up to 3 days.