My readers have been asking me to play Health Detective and inform them about some uncommon food ingredients they’re hearing about…so…here is the first of many I will be reporting on.

Mild-sounding words and categories are used by the food industry as what is termed “umbrella” ingredients – meaning they are under the protection of a broad category and are usually horrible in both nature and often side-effects.

Let’s consider the EXACT definition of “natural flavors” from the Code of Federal Regulations, it will
tell you a lot – actually, it doesn’t tell us much!

The above cited code doesn’t really sound to me as any kind of protection that what is included in our food supply is healthy, just that its function is strictly “flavoring” and not “nutritional.” And just because it is labeled "natural flavor and/or flavoring" doesn't mean the public should have to ingest a disgusting ingredient from an animal!

With that said, let’s test your knowledge of ingredients that are legally being added to our food supply. I’ve written and taught extensively about the legal hidden sources for such chemicals as monosodium glutamate that can be hidden under generic categories like “natural flavoring (s)” when it’s in an allowable percentage. But not until a professional colleague and friend brought this particular substance to my attention had I researched the ingredient in this investigative report. 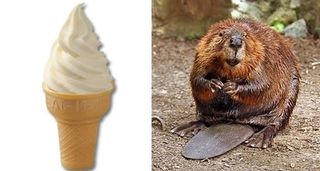 Prepare yourself for the answers. The flavoring is actually called Castoreum and is found near the anus of the beaver in two sacs between the anus and the external genitals!  The discharge of the
castor sac is combined with the beaver’s urine, and used during scent marking of territory. Both male and female beavers possess a pair of castor sacs and a pair of anal glands located in two cavities under the skin between the pelvis and the base of their tail.  Castosreum is a product of the trapping/hunting industry. When beavers are skinned for their fur, these glands are removed and sold after being smoked or sun-dried to prevent putrefaction. It is not only used in food, it is also part of many high-end formulas for perfumes.

The North American beaver population was once more than 60 million; today it’s estimated at 6 million.

Castoreum is used in “high priced” perfumery for “refined leathery nuances.” It is also reported to be
used in some incense and to add flavor and odor to cigarettes. In food, Castoreum is used to flavor candies, drinks, vanilla ice cream, and in desserts such as puddings.

A downright disgusting thought, it IS approved by the FDA as a “generally recognized as safe (GRAS)”
ingredient and can be listed in the category of “natural flavoring” on a product label. Castoreum, as a flavor ingredient has been used in our food industry for over 80 years….oh great!

I don’t know about you but this makes an even stronger case for making your food from scratch so you can control every ingredient!

Where is Castoreum usually found?

Usually it’s found in cheap strawberry and raspberry syrups and flavorings and in vanilla ice cream.

I’m sticking to high priced, organic all natural ice cream and making my own fruit syrups…regardless
of what GRAS status this ingredient is granted.