Fatty Liver and Diabetes, There IS a Connection

This investigative blog report is especially close to my heart – many of my family members and younger siblings are Type 2 Diabetics; I battle high blood sugar constantly. I have been able to maintain safe levels through strict carbohydrate and sugar restriction but it requires discipline, constant monitoring, and nutrients to help maintain a healthy balance.

What most people do not understand is the intimate connection between liver health and diabetes; hopefully this report will enlighten you and assist in taking care of the only organ in our body that can completely rejuvenate – given the right nutritional support, that is!

Fatty liver is a common liver condition that occurs in about one-third of adults in the U.S. In some cases, the condition is mild and causes no noticeable symptoms, but in other cases it can lead to permanent liver damage or complete liver failure.

Fatty liver is frequently associated with alcoholic liver disease, but it may also have non-alcoholic causes, such as those cited in this report...click here to continue reading... 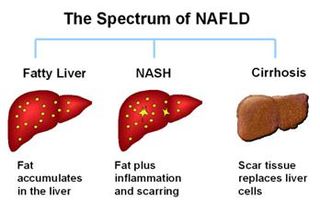 The liver both stores and produces sugar – acting as the body’s glucose
(fuel) reservoir and keeping your circulating blood sugar levels and other body
fuels steady and constant. The liver both stores and manufactures glucose, depending on the
body’s need to store or release glucose. This release is primarily signaled by
the hormones insulin and glucagon.

Here’s what occurs: during a meal, your liver stores sugar (or glucose)
as glycogen for use later when your body needs it. High levels of insulin, and suppressed levels of glucagon during a meal, promote the storage of glucose as glycogen. 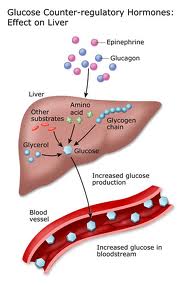 The body is programmed to manufacture sugar when you need it.
Therefore, when you are not eating, especially overnight or between meals, the body is forced to make its own sugar by supplying sugar or glucose by turning glycogen into glucose in the process called glycogenolysis. Another way the body can manufacture sugar or glucose is by harvesting amino acids, waste products and fat byproducts, a process called gluconeogenesis.

When your body’s glycogen storage runs low, the body begins to conserve sugar supplies for the organs that always require sugar as their fuel – the brain, red blood cells and parts of the kidney. To supplement the limited sugar supply, the liver makes alternative fuels called ketones from fats; a process called ketogenesis that begins when the hormone responsible for ketogenesis signals that its fuel supply is low as is the level of insulin. Ketones are burned as fuel by muscle and other body organs. And the sugar is saved for the organs that need it.

NOTE:
The terms “gluconeogenesis, glycogenolysis and ketogenesis” may seem like
complicated concepts or words on a biology test. Take a moment to review the
definitions and illustrations above. When you have diabetes, these processes
can be thrown off balance, and if you fully understand what is happening, you
can take steps to remedy the problem or prevent them from occurring in the
first place.

Individuals with type 2 diabetes should understand these concepts. For those of us who routinely have high morning blood sugar values, these occur as a result of excessivegluconeogenesis overnight. Keep in mind that the rare condition of too much ketone formation can be dangerous and requires immediate emergency medical attention.

Yes, an accumulation of fat in your liver cells may raise your risk of developing type 2 diabetes, regardless of the fat in other places of your body.

A new study suggests that fatty liver disease, also known as fatty liver, may be an independent risk factor for type 2 diabetes. Researchers found people with fatty liver disease were significantly
more likely to develop the disease within five years than those with healthy livers.

According to Sun Kim, MD, a researcherat Stanford University in California, “Many patients and practitioners view fat in the liver as just ‘fat in the liver,’ but we believe that a diagnosis of
fatty liver should raise an alarm for impending type 2 diabetes. Our study shows that fatty liver, as diagnosed by an ultrasound, strongly predicts the development of type 2 diabetes, regardless of insulin concentration.”

Researchers say fatty liver often occurs along with other risk factors for diabetes, such as obesity and insulin resistance, which has made it difficult to determine whether the condition itself is a specific marker for actual diabetes risk. But in this study, researchers found that even among those with similar insulin concentrations, those with fatty liver were still twice as likely to develop type 2 diabetes.

In the study, published in the Journal of Clinical Endocrinology & Metabolism, researchers looked at the relationship between fatty liver and diabetes risk in 11,091 adults in Korea.
The participants' insulin concentration levels and liver function was measured at the beginning of the study in 2003 and again five years later.

In addition, almost half of those with fatty liver were in the upper quartile for fasting insulin concentration, a marker of insulin resistance, compared with 17% of those without fatty liver.

Researchers say the results suggest that as well as being associated with insulin resistance, fatty liver may independently increase the risk of type 2 diabetes.

There are several steps you should
regularly take if you have any of the blood sugar risk factors; metabolic
syndrome, insulin resistance, or diabetes.

Example:
If you weigh 160 pounds, you should consume a minimum of 80 ounces of
water daily.

Take Note: One of the largest studies to look at the consequences of consuming adequate water was published last year in Diabetes Care, a publication of the American Diabetes Association. French scientists tracked more than 3,000 healthy men and women ages 30 to 65 for nearly a decade. All had normal blood sugar levels at the start of the research.

After nine years, about 800 had developed Type 2 diabetes or high blood sugar. But those who
consumed the most water, 17 to 34 ounces a day, had a risk roughly 30 percent lower than that of those who drank the least.

The holidays for this season are behind us but the rest of our life is ahead.
Resolve now to reduce your blood sugar levels in order to enjoy aging without
looking or feeling old, naturally.

Your
Partner in Health,

This is very informative article. I've been looking for several articles on how to properly take care of my liver. I've been under medication for quite some time and I think I need to detoxify my liver.